You are here: Home / Articles / How King Compression Adjusters Work

King Shocks offer Compression Adjusters on 2.0, 2.5, and 3.0 coilovers, smoothies and internal bypass shocks. King compression Adjusters have a single knob to quickly make adjustments to mid speed compression, resulting in changes to ride comfort and performance. In addition to helping you dial in the perfect ride, they improve the function of the shock and can also save you countless hours of suspension tuning. Compression adjusters add damping force, and require special tuning, at AccuTune Off-Road we will custom tune your shocks to put you in the useable range of adjustment. 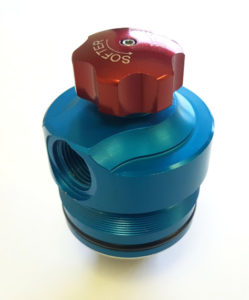 How Does The King Compression Adjuster Work 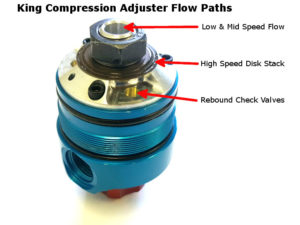 As you turn the knob on the King Compression Adjuster the flow path increases or decreases in size. The unique shape of the adjuster aims to make each click a similar amount of adjustment. You can see the flow volume is substantially larger than the Low Speed Fox adjustment. The increase volume is what makes this a mid speed adjuster. 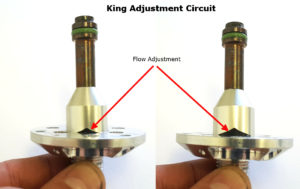 How Much Adjustment Does The King Compression Adjuster Have

The downside of the high flow, mid-speed compression adjuster design is that it doesn’t impact the damping curve in very useful ways. If we want to control road feel, handling, and g-outs then we want to adjust low speed damping. If we want to control performance on big bumps or whoops we want high speed adjustment. Having a mid speed adjuster does impact both of these, with one knob, but the amount of adjustment is not as great as if they were separate adjustments.

At high speed the King compression adjusters can add between 25% (solid axle and standard IFS) and 40% (light IFS) more damping depending on the vehicle. High speed adjustment is delivered in manageable increments across the last 24 clicks. The adjuster is more effective on IFS vehicles because the shock operates at slower speed, where the mid speed adjuster is more effective. The downside is that IFS shocks also operate at higher loads, making the adjustment range a smaller percentage.

Other Benefits of Compression Adjusters:

There are many other lesser known benefits of compression adjusters that improve the performance of your shocks such as increased damping, better cooling and more consistency.

Want to join the discussion?
Feel free to contribute!